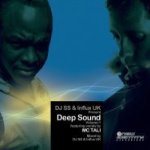 New Identity Recordings is a drum and bass record label that started life in 1996 with none other than the mighty Matrix offering the first release, and since then it has become a first point of call for many upcoming artists who have later gone on to become drum and bass household names; John B, Distorted Minds, Commix, Nu:Tone, Blue Sonix, Twisted Individual, Influx Datum, Generation Dub… The list goes on! Other established artists have also made appearances such as Peshay, Q Project, Grooverider, Shy FX, Mental Power, Tekniq, Sonic + Accidental Heroes, Influx UK and of course DJ SS.
The emphasis of New Identity is on the deeper grooves, the darker or funkier melodies, music that sounds great in the club and can also be listened to at home, however don’t be surprised if the occasional jump-up destroyer finds its way to the label!