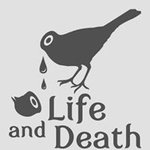 The common thread that links everyone in involved in Life and Death is something beyond just their specific talents. Yes, everyone involved is talented, as musicians, dj’s, promoters, yadda, yadda, yadda. But what defines them is also something else. Each one in their own way, they are all true party instigators.. the fault of some crossed wires in the back of their brain perhaps, or maybe not enough sunlight as children, who can say. But they are definitely. Not. Normal. And that’s totally a good thing.

About Life and Death
Life and Death has a peculiar concept. The music in most cases hovers around a dark pop and house approach with a definite psychedelic sensibility.Soulful dance vibes with little pieces of a post-rock attitude. Not immediate dance floor bombs but melodic tunes built around the concept of incorporating influences of its Italian Cosmic Disco and UK/US New Wave and Indie heritage, but without the intention of “reviving” old sounds — instead creating new ones. It’s a concept that maybe seems less peculiar after exploring the eclectic musical backgrounds of its founders Manfredi Romano (aka DJ Tennis) a longtime soundtrack producer and Greg Oreck, one half of New York house duo Thugfucker. The Family is completed by Karm and Matteo Milleri aka Tale of Us. After just a few releases it’s a sound that’s already found its way into the bacchanalian fray of some of the best parties worldwide.